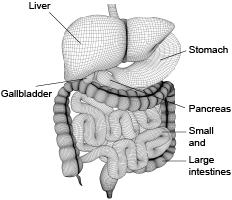 Different laboratory tests as well as imaging examinations and in some cases also biopsies allow the diagnosis of a liver disease.

First of all your doctor will do a detailed anamnesis (patient's medical history) and perform a physical examination. Visual observation, palpation (touching), tapping and auscultation (listening to internal sounds of the body using a stethoscope) are the essential parts of this examination.

In some cases, a sample of tissue is taken (liver biopsy) in order to confirm the diagnosis or to determine the stage of the liver disease.

A liver biopsy is a procedure that involves taking a small piece of liver tissue under local anaesthesia, by inserting a long needle, for examination with a microscope. This is essentially a harmless procedure, lasting less than a few seconds. The most common side effect is pain, which will disappear with the aid of medication within one day. Haemorrhages after liver biopsy are extremely rare. 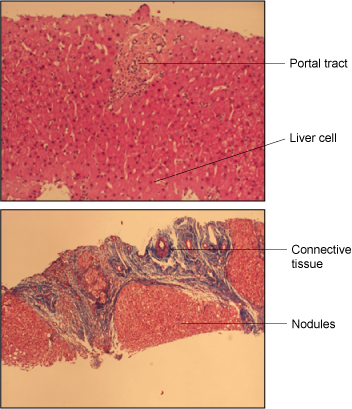 The portal tract contains blood vessels and the bile ducts.
90% of the tissue contains liver cells (stained in red).

Cirrhosis is characterized by the accumulation of connective tissue (stained in dark purple). Liver cells are arranged in nodules.

The Fibroscan® is a non-invasive method of assessing the amount of the liver scarring. The very first Fibroscan® in Switzerland was installed – thanks also to the Foundation for Liver Diseases - in our liver centre.

The Fibroscan® was developed by a French company and has made it possible to determine the extend of liver fibrosis without taking a liver biopsy. Thus, patients with hepatitis C or non-alcoholic steatohepatitis (NASH) are spared repeated liver biopsies. We are proud of being the first institute in Switzerland to introduce this new technology.
Fibroscan® is a special form of ultrasound examination and is – like the conventional ultrasound – non-invasive and low in costs.

The Fibroscan® sends sound waves into the liver and then measures the speed at which these sound waves are propagated in the liver. 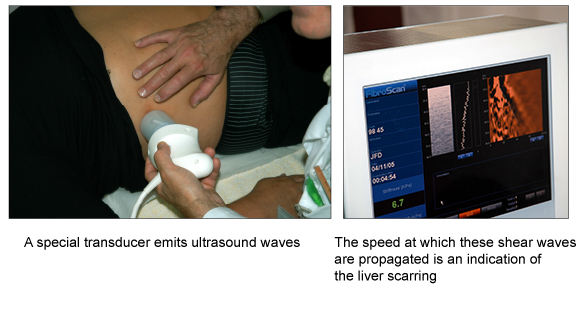 Modern imaging techniques make it possible to characterize local lesions (tissue abnormalities) and also allow visualising the vascular system of the liver and the biliary tract.

The most important imaging techniques are summarized in the following table: